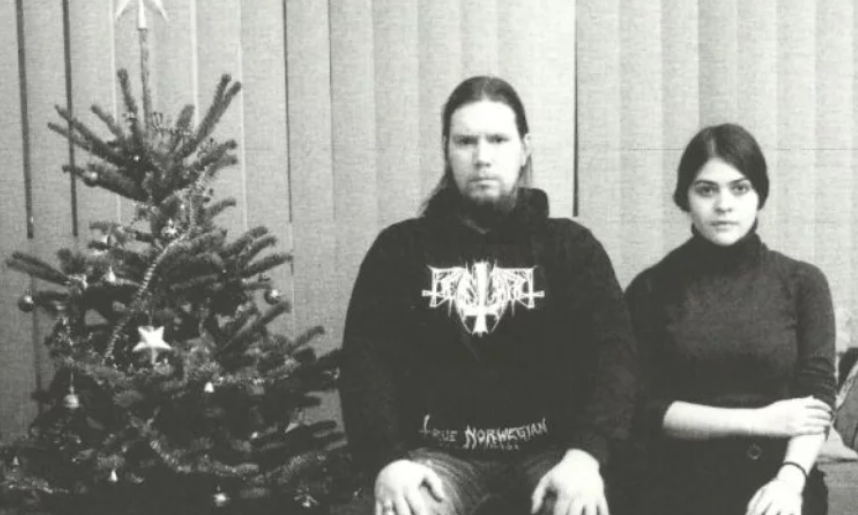 There are things that just don’t go together: oil and water, politicians and the truth, black metal and Christianity. With the holidays fast approaching, it’s more and more obvious that Christmas is less about Christ these days and more about gifting the latest shit to placate your bratty kids or significant other or something like that.

And while that may be true in nearly every case, artists like Shining’s Niklas Kvarforth wonder why the genre is blocking itself from writing about the evils of religion.

“I do not see why all the black metal bands have to oppose religion or be anti-religious because religion is one of the biggest fucking evilest things in the world. It causes pain, it causes death.”

Kvarforth’s right! Yet, the sad thing is that while there is no shortage of Christian BM, or “unblack metal,” it tends to miss its mark due to the ever-present clash between form and content. After all, black metal should be hateful and Jesus, though His name is often abused, was a love junkie.

Because prolonged exposure to typical holiday music can lead to self-defenestration for pessimists like us, we have assembled a playlist that is guaranteed to make this your least painful December ever. Don’t be surprised to find picks by bands that have branched out from BM and/or blend genres. We wish you a thoroughly black metal Christmas!

Venom’s “Black Xmas” is the definition of classic! It serves as the opening on Calm Before the Storm (1987) — a perfect album to give to the metal newbies in your family.

In addition to “Christmas Is Dead,” Plaag has several other tracks criticizing the most wonderful time of the year. Plaag began as a one-man band and is back to functioning as such. This black n’ roll project from Belgium is signed to Misantrof ANTIRecords — the label of Daniel Vrangsinn, who actually performed on a couple of Plaag songs. Check out Misantrof’s many HOLY FUCKING ANTIChristmas albums, which have repeatedly featured Plaag. (Although you know Vrangsinn from Carpathian Forest, he recently decided to take a break from the band but stressed that he will continue to work with them in the studio.)

Joululevy (2009), which means “Christmas album,” is a compilation that contains all Ajattara’s previously released Christmas singles and four new recordings. Many of the songs on this offering are covers, including this extremely bizarre and slanderous pick about Santa Claus, as you can see. For at least their first three holiday singles, Ajattara made a strange tradition of placing coupons for a free ham inside three random copies.

Livløst’s sadistic, blasphemous, and amusing “Holy Night” can be found on their debut record, Cold Skin (2019). This Norwegian one-man project dishes up the type of necro, ambient BM that is sure to leave your parents wondering what they’ve done wrong.

Haust is the blackened punk band from Norway that you need to know! They’re truly one of a kind. “No Christmas” is the first track on the split Black Hole-Xmas (2011), which also contains Haust’s “No Fun” and Okkultokrati’s “All I Want for Christmas Is Glue.”

Sweden’s Gehennah is known for their thrashy black n’ roll / street metal. This nostalgic group has been spreading their gospel of booze and violence since 1991. Both “Sathana Claus” and “Merry Shitmas!” first appeared on the EP No Fucking Christmas! (1995). These two songs were included as bonus tracks in 2018 disc- and digital versions of Hardrocker, Gehennah’s 1995 debut.

Give your God-fearing relatives a nasty surprise. This song from Funeral Mist’s sophomore album, Maranatha (2009), is quite far from what its title would have you believe: “Jesus saves! Drink now his blood and kill in his name.”

It’s no secret that Christmas very often brings out the worst in people, namely greed: “Man is an anathema in embers of infernal greed, the yawning abyss of madness.” This awesome song by Limbonic Art is the penultimate track on Ad Noctum — Dynasty of Death (1999).

If you use pills to cope with obnoxious relatives during the holidays, the trippy “Silent Light, Alien Night” by Angst Skvadron — the avant-garde project of Urgehal’s late Trondr Nefas — replicates the inner state you might find yourself in. While the title is, obviously, a drugged-out play on one of the most popular Christmas songs, the music itself is more chilling than December weather. In honor of winter and Metalocalypse’s Dr. Rockso, we also recommend Angst Skvadron’s “The Snowman.”

“Silent night, holy night.
All is calm, all is bright.
Kampfgruppe advancing
in burning bridges light.”

You can always count on Marduk to deliver radical evil. Marduk’s “Silent Night” is the final song on their latest album, Viktoria (2018). The lyrics are pretty brilliant and also extremely refreshing.

Germany’s Eisregen certainly makes some of the most eccentric and outrageous music around. Although their changing style has been described as black/death/gothic, they are truly in their own category. The dark metal gem “Kai aus der Kiste” from Schlangensonne (2010) is just too odd for words. The song takes its name from a very different children’s story. “Kai aus der Kiste” opens by telling us that poor Kai celebrates Christmas in a shoebox and the one thing that he wants from Santa is a hamper to live in instead.

This magnificent experimental rock pick by the Hungarian black metal legends Tormentor has an incredibly unique sound. Hopefully, you already know that Tormentor is fronted by Mayhem’s Attila Csihar. “The Little Match Box Girl,” which hails from Recipe Ferrum! 777 (2000), borrows its premise from a fairy tale by the same name by Hans Christian Andersen about girl who freezes to death. Before her passing, she sees comforting visions that include a Christmas tree and a set table.

“Blind knowledge is working at useless ground.
And crazy faith is living the dream of its liturgy.
A new god is a word — or the mere sound…”

Although people tend to associate Ulver with their early black metal work, they’ve switched over to experimental electronica long ago. Thus, though “Christmas” from Blood Inside (2005) is certainly not black metal, it is still an incredibly entrancing composition that will certainly appeal to BMers.

Is this a troll?! Or are we serious? Stryper’s “Winter Wonderland” is an exceptionally pleasing, nostalgic delight. You’ll definitely want to check out frontman Michael Sweet’s solo renditions of “O Holy Night,” “Alleluia,” and other great songs! You might have heard that Sweet starred in the drama Noëlle (2007), a.k.a. Mrs. Worthington’s Party, for which he sang the traditional carol that gave the film its name. Have you seen Mr. Sweet’s fantastic Christmas shows?! His angelic voice is proof that Jesus indeed works miracles!

Tour de Force 0
Dimmu Borgir, Gorgoroth, and Six Other Bands Confirmed for Beyond the Gates
November 17th, 2022 at 9:56am Hesher Keenan