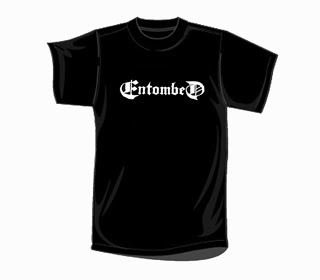 Esteemed metal scribe Phil Freeman wrote a fun piece for Running The Voodoo Down in which he talks about the extremity of the metal shirts that are flooding today’s metal clothing market. Freeman notes that like metal itself, metal t-shirt designs have gotten even louder, even crazier, even spikier, even more outrageous than they’ve ever been. One part in particular struck me:

One option a few bands have exercised in recent years, which has pleased me greatly, has been the simple black-and-white logo shirt. I have one from Atheist, one from Entombed, and one that’s not quite a straight logo shot, but features a logo and a simple white graphic, from the L.A.-based Native American crust/grind band Resistant Culture. And, of course, Motörhead has been doing that for decades—the classic “Motörhead/England” shirt…

My metal t-shirt collection has grown to such ridiculous proportions that I’ve had to place a moratorium on new t-shirt purchases of late (I had to make an exception for a $10 bootleg Iron Maiden shirt the other night) but when I do buy shirts I’ve always opted for the simplest design, usually a plain white print on black, or perhaps something a little fancier — but never a full-frontal, full-color print (for example: this). It’s not even necessarily a matter of age, as Freeman asserts; I’ve always preferred simple. There’s something about those outrageous shirt designs that just begs for attention in a very teenage way, sure, but anyone other than a teenager looks downright ridiculous in a shirt like that. Of course, teenagers probably do make up the majority of the metal t-shirt buying public.

What do you think? What kinds of metal shirts do you prefer? Should we make a full-frontal, full-color shirt for the MetalSucks merch store?

Just because you love a musician doesn’t mean you can rock their t-shirt.

Metal Sucks Greatest Hits
0 -
Nothing to See Here, Just Some Photos of Cats Wearing Metal Battle Vests
0 -
Rigged: Luke Hoskin of Protest The Hero
300 -
Sebastian Bach: The MetalSucks Interview
2060 -
How Metal Nerds Choose What Bands To Like: A Scientific Model
0 -
Exclusive Interview: Damien Echols of The West Memphis Three on His Life After Death
0 -
Editorial: The Metal Community Must Stop Letting Phil Anselmo Off the Hook for His Racist Remarks